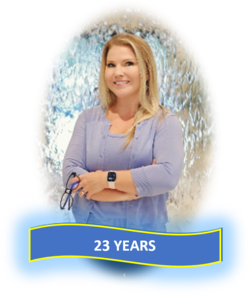 Shelly Cannon is living proof that honesty and hard work are the keys to success.

She excelled academically throughout her early scholastic years in New Smyrna Beach, Florida and was featured in Who's Who Among American High School Students for earning the Florida Bright Futures Scholarship, as well as the Superintendent's Elite Scholar Medal For Academic Excellence, and graduating as Valedictorian of her high school class.

In 1999, Shelly put a successful modeling career on the back burner and joined

FirsTrust as a receptionist during the day while attending college at night. She graduated at the top of her class with a bachelor’s degree from the University of Central Florida and became the firm’s Chief Operations Officer in 2005 and a Partner In 2008.

After 23 years with FirsTrust,  Shelly retired her daily routine to pursue personal health objectives. She has graciously agreed to serve as Chairman of our Independent Advisory Committee where the firm can continue to benefit from Shelly's thought leadership in areas of best practices and quality control.

Those who know her best regard Michelle Cannon among the most competent and internally driven people they’ve ever known. And anyone who spends even a few minutes speaking with her will quickly appreciate how someone so extraordinarily bright can also be so genuinely down-to-earth.